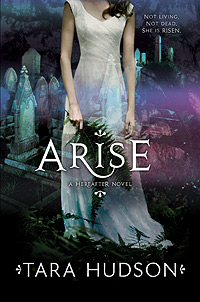 New Orleans
Saint Louis
Number One Cemetery
A night there can change a life . . . or a death.

Increasingly worried that dark spirits will carry out their threats and hurt the people she cares for most, Amelia is ready to try anything to protect them. And for his own very different reasons, Joshua has come to this cemetery at midnight to join her in a powerful ritual. Both know that once Amelia steps inside the Voodoo circle and the beautiful girl from the Conjure Café begins the ceremony, everything will change.

Tara Hudson's enthralling sequel to Hereafter escalates the danger and excitement, bringing a new dimension to her already mesmerizing story of a haunted love.

"Again, Hudson earns a spot in the paranormal-romance front ranks, with a fast-unfolding plot and intriguing characters. Leaving small-town Oklahoma for New Orleans might be a bad move for Amelia, but it's great for readers. A creditable second act; genre fans won't be disappointed."
—Kirkus

"With a lush and vibrant new setting, Amelia's continued struggle to find some sort of normal life and love once again draws readers into a world of danger and romance. Fans of the Beautiful Creatures series by Kami Garcia and Margaret Stohl (Little, Brown) will find a similarly haunting, atmospheric feel in the tortured romance of the Hereafter series."
—VOYA